Home » When there is an advance in food sovereignty in one part of the world, our entire movement advances 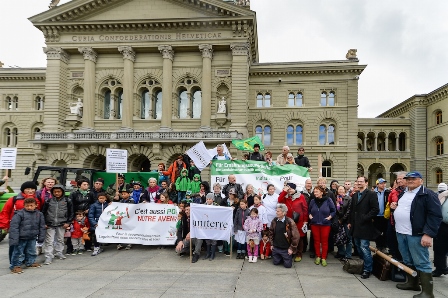 (Harare, March 21st, 2016) Nearly ten years ago, a forum was held in the village of Nyéléni at Sélingué in Mali which brought together over 500 people from more than 80 countries representing organisations of: farmers and peasants; traditional fisherpeople; native peoples; rural workers; migrants; landless people; pastoralists; forest communities; women; youth; and consumer, environmental, and urban movements. At the forum, they drafted the Nyéléni Declaration, which made a clear restatement of the principles of food sovereignty and highlighted the importance for everyone to work for a world where “food sovereignty is considered a basic human right, recognised and implemented by communities, peoples, states, and international bodies.”

During the years since the Nyéléni Forum, there have been a number of efforts to have food sovereignty recognised at various levels. But it has been very difficult to ensure that the interpretations of food sovereignty in these official texts reflect its true meaning.

For this reason, La Via Campesina is particularly enthusiastic about the initiative that Uniterre and l’Autre syndicat are embarking upon. With the support of a broad alliance for food sovereignty, these two member organisations of La Via Campesina have succeeded in collecting a sufficient number of signatures of Swiss citizens to enable a national referendum to be held. The purpose of this referendum, which will take place within the next three years, is to decide whether an article on food sovereignty should be incorporated into the Swiss Constitution. This is an extremely important matter. If enough Swiss citizens vote for the amendment, Switzerland will become the first country in the Northern hemisphere to modify its constitution, and consequently to reform its agricultural policy, in order to move towards local small-scale agriculture, fairer international trading relations, and an agricultural system that is attentive to the population and respectful of other regions. There is a lot at stake, for on this occasion it is a question of managing to include a definition of food sovereignty that takes into account all of its dimensions. Uniterre, l’Autre syndicat, and all of the alliance for food sovereignty have a long information and awareness campaign ahead of them. As an international movement, La Via Campesina will be following the progress of this initiative closely and will provide it with support. When there is an advance in food sovereignty in one part of the world, our entire movement advances.