Home » Watch the video of the Nyeleni Europe Forum 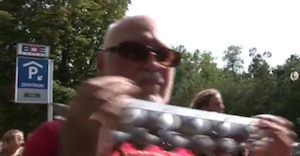 Representatives from 30 European countries came together in Brussels from the 5-7 March 2012 to promote a food sovereignty framework for food and agriculture to the European institutions, and to launch the Synthesis report and Action Plan from the Nyeleni Europe Forum for Food Sovereignty held in Krems, Austria, in August 2011, where over 400 people met from across the whole European region.

The Synthesis report and Action plan, as well as a video documenting the Nyeleni Europe Forum were presented at a conference “More farmers, better food” held at the Committee of the Regions. The participants demonstrated corporate control of the food system through a street theatre event outsidewhich also outlined the capacities of people and farmers to resist and transform the situation of food and farms in the future.

This meeting in Brussels forms part of a broad movement throughout Europe which is following up from the Nyeleni Europe Forum and continuing to work together to bring about Food Sovereignty in Europe.

“We are already putting Food Sovereignty into practice, every day, across Europe. While we attempt to transform International and European agricultural policy, we are also working with consumers to find ways around the supermarket-corporate system which is trying to prevent us from providing them with good quality, local and healthy food. We are already organizing the production, the processing and the distribution of food in our communities, in the framework of Food Sovereignty” says Andrea Ferrante, from the farmer’s organization AIAB in Italy.

“Thanks to European policies, more than 20% of small scale farms have disappeared since 2007 in Europe. In response to this, we are seeing a multitude of community, farmer and consumer led initiatives developing across Europe in order to preserve European agriculture which public policies seem bent on destroying. We are here to show not only that we have alternatives, but that those alternatives are real.” says Jocelyn Parot, a member of the European network URGENCI, which brings many community supported agriculture initiatives together.

Delegates at the Nyeleni Europe Forum committed to taking the European food system into their own hands by:

More information is available online on www.nyelenieurope.net, and the documentary of the forum here (http://vimeo.com/37734507).

*”Food sovereignty is the right of peoples to healthy and culturally appropriate food produced through ecologically sound and sustainable methods and the right to define their own food and agriculture systems.“ (Nyeleni Declaration, 2007).