Home » Via Campesina discusses Agrarian Reform and Globalization of the struggle 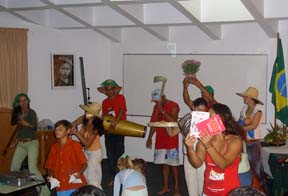 Agrarian reform as a tool for providing a sustainable relation between peasants and the environment is not limited only to the winning of land. That was the concept that permeated the discussions on the first day of the International Meeting of the Landless, organized by La Via Campesina International at the Capuchino Monastery in Porto Alegre (RS), Brazil. Around 150 peasants from social movements of Europe, Asia, Africa and the Americas spoke about their local situations and discussed a new vision for agriculture and the social function of land. The strategies of struggle and resistance to neoliberal policies, mainly of the WTO and of the World Bank, were also topics discussed at the meeting.

According to Peter Rosset, member of the International Planning Committee for Food Sovereignty, the concepts about agrarian reform have changed over time. Along these lines, he points out the role of La Via Campesina, whose work shows the breadth of the term. “The struggle for agrarian reform is not limited only to the question of land, which is one of the physical means used in agriculture to produce food.” He stresses the importance of territory, “evidence of a new relation of people´s respect for the environment “.

Daniel Pascual Hernandez, of the movement of indigenous people of Guatemala, points out that the discussion about the concept of territory, very much present among the indigenous people, must not be seen as something restricted only to their culture.
“The indigenous peoples recognize that animals and plants, as much as human beings, are part of, not owners of the space”, he states. Hernandez issued the challenge to develop, within the peasant movements, the relations between whites and indians that was destroyed during the European colonization of Latin America.

Strategies for the struggle and defense of the territories were other problematic questions discussed during the meeting. An often-used strategy is the occupation of large estates, practiced by peasants in Latin America and Asia as a way to pressure governments to enact agrarian reform. However, Egídio Brunetto of the Landless Workers Movement of Brazil (MST), emphasizes the importance of local actions always being directed toward the global struggle. “We need international and anti-imperialist struggles that bring young people and change the relationship to nature. We have to produce food and not commodities”, he argues.

Neoliberalism – the meeting of the landless pointed out the divergence between agrarian reform proposed by the World Bank, which would be defended in the Second International Conference on Agrarian Reform and Rural Development and the process defended by the social movements in the rural areas. The first conference held by the United Nations Agency for Food and Agriculture in 1979 in Rome, Italy, was marked by both positive and negative points. At the same time that it opened up a discussion in defense of biodiversity and considered seeds as a patrimony of humanity, it also adopted the policy of agrarian reform proposed by the World Bank. “It was then that the break occurred between the international agencies and the social movements”, analyzes Egídio. “The World Bank finances governments to buy lands for people without land, instead of expropriating areas that are not productive. With this policy the World Bank ignores the social function of land and transforms it into a commodity”, he states.

The participants also criticized the neoliberal posture of the governments. Based on the law of private property to the detriment of social welfare, the governments generally make use of police and military forces to criminalize the social movements. U.S. investments in the Brazilian Amazon, in the triple-alliance zone of Paraguay, and now the construction of a military base in Korea, are placed on Via Campesina´s plan for struggle.