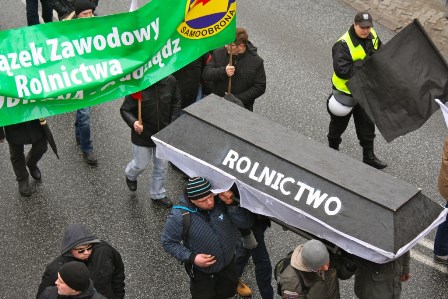 (Poland, Warsaw, February 17, 2015) Today 6000 farmers marched in Warsaw to protest the Polish government’s failure to address their longstanding demands. After failed talks between Union leaders and the prime minister this afternoon farmers built an occupation camp outside the prime ministers palace and have vowed to remain until their demands are met.

Protests have been taking place across the country over the last three weeks with a range of organisations from community groups and local protest committees to regional and national unions blockading roads and government ministries in hundreds of locations. At the national level the protests are being coordinated by the farmers’ branch of the Solidarity union. The protests today are also being supported by unions representing bee-keepers, coal miners and nurses who are also on strike.

The key demands of the Solidarity Union are for robust legislation to address four main concerns:

These demands build on long standing grievances among farmers who say that the  government has not fulfilled agreements and contracts, leading to bankruptcy for many farmers, loss of agricultural land and to an agricultural model that has prohibited the direct sale of products and forced farmers to focus on selling raw products into the low-priced export market which are then processed by international companies and re-imported leaving Polish farmers with little of the real value of the products.

Speaking at the protest Maria and Mariusz Nowak, family farmers from Zachodniopomorskie province said: The government needs to resign! We should withdraw our membership of the European Union and recover our national food self-sufficiency. It is crazy that we import products we can produce here – Our products are better quality and are healthier. The government is undermining polish farmers and needs to resign!

Jadwiga Lopata, a family farmer and co-director of the International Coalition to Protect the Polish Countryside (ICPPC) said: The health and welfare of the nation depends on consumers and farmers having access to traditional seeds and good quality food. The Polish government does not accept this and is destroying the roots of Polish agriculture by listening to corporations rather than Polish people.