Home » The Rights of Peasants of South East and East Asia

We, delegates of peasants, women and men, of the international movement La Via Campesina in the South East and East Asia region, attended the Regional Training on the Rights of Peasants in Chachoengsao Province, Thailand from 26 to 29 May 2009. During this training we reiterated our commitment to uphold these rights; our initiative towards the International Convention on the Rights of Peasants (ICRP) has been advancing within UN law and human rights mechanisms and we have been working in many different levels such as regional (ASEAN) and our respective national levels as well. 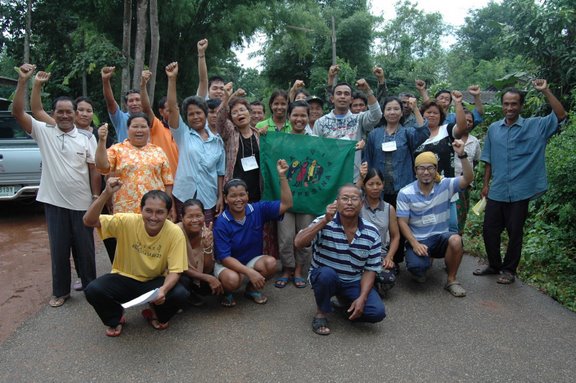 We peasants, women and men, are being increasingly and violently expelled from our land and expropriated from the source of our livelihoods. The current global food crisis demonstrates the massive violations of the rights of peasants. The violations of our rights have been very specific, as the current agricultural system hinders a dignified life, prevents us from preserving and cultivating our seeds and, above all, marginalises women. Our training concludes that these violations of the rights of peasants are happening in every country: Thailand, South Korea, Timor Leste, Japan and Indonesia.

In Thailand the basic rights of peasants, laborers, and the urban poor have not really been achieved. The poor are not able to access rights to housing and farmland. Community rights to land, water and forest management are undermined. We are not able to maintain our livelihood.

The Thai government has promoted a green revolution and established protected areas, which overlap villagers’ land. These policies pressure and encourage peasants to abandon their traditional production methods, thereby losing native seeds. Consequently, they became unable to be self-reliant and lose the opportunity of having a dignified and independent life.

For the sake of energy development and modern agricultural schemes, the government constructs dams, evicting peasants from their farmland. Water divergence projects and the water resource privatization policy – commoditizing water resources – allow corporations, closely allied with bureaucrats and politicians, to extract benefits, yet exclude peasants from the rights to utilize and manage natural resources.

Peasants who go bankrupt in rural areas have to move to cities, where they live in slums. They become laborers whose wage is oppressed by their employers. They have no job security and have to work in unsafe jobs. Women peasants have to work in undignified jobs and at risk of gender discrimination. Government development has consigned a new quality of life to peasants and the urban poor, which is “poverty and debts”.

Therefore, the oppression and exploitation of the urban poor cannot be separated from the undermining of peasants in rural areas.

In Thailand, we, peasants on behalf of La Via Campesina, together with the members of the Assembly of the Poor (AOP) and the Northern Peasants Federation (NPF), have been advocating the recognition of and respect for the rights of women and men peasants since 2001.

La Via Campesina calls on Thailand Human Rights Commission to advocate raising awareness of peasants’ rights amongst the public and to push the Thai government to support the declaration of the rights for women and men peasants.