Home » Stop Violence against women: We must end this culture of exploitation

I come from a continent where our culture defines success as the ability to obtain more and more wealth and power through the exploitation of others. Not surprisingly this thought permeates all levels of our society from our economy to our homes. Unfortunately, we are exporting this culture around the world. 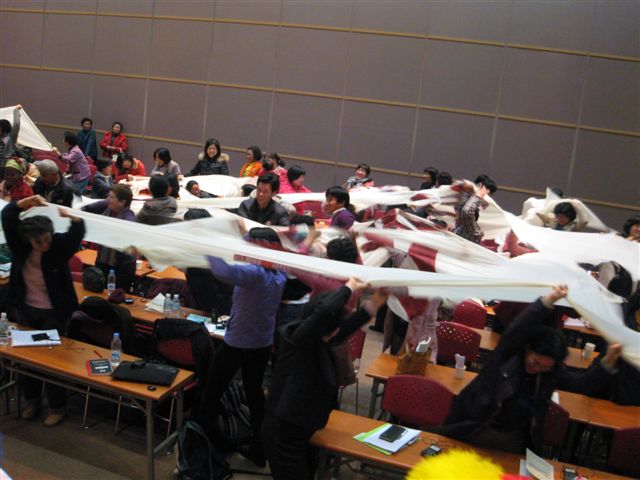 Launch of the Campaing against Violence against women in Korea by the Korean Women Peasant Association and the International Women Committee of Via Campesina. A huge white piece of cloth representing patriarchy was torn apart by the participants of the Seminar on March 6, 2009.

As farmers we produce food to feed our families and our communities. The Trans National Corporations (TNC’s) have taken that food and turned it into a commodity to obtain wealth and power. The more powerful they become, the more injuries we sustain. First they concentrated and consolidated their power by taking control of what we produced. Then they told us: “If only we would use their technology every thing will be better.” We adopted mono-culture. We became addicted to their technologies using pesticides and more and more energy. Then they took our seeds. They convinced us that it is our fault that we couldn’t make ends meet. They convinced our governments which should have protected us that it was our fault that there was a farm crisis. They told us: “If only we could integrate our markets everything would be better.” We signed on to NAFTA and the WTO. Everything got worse.

Our exports increased. Our incomes declined. We take other jobs to support our farms. 50% of Canadian farmers work off their farms to support their farms. The number in the US would be similar. Mexican farmers migrated to the US or Canada to work. They left behind “villages of widows and children” to work the land. We lose are farms and end up in the cities. From 1996-2006 Canada lost one farm every 2 hours. The financial stress destroys our environment, our farms, our families, and our communities.

Why don’t we say no to this abuse? We believe it is our fault. We have an addiction that we need help to break. We love the land. We don’t want to admit failure. We are afraid that the unknown will be worse than the current situation.

So to feel better and feel like we have power, we consume. We buy things we cannot afford which causes more stress in our families. We hope that if we buy something new, we will look successful, we will feel important, and we will have power. Yet thru that consumption, we help the TNC’s perpetrate their violence on other communities. So that we can have fuel, they extract oil from the tarsands. It poisons the land and the water and so our indigenous communities are dying with high rates of rare forms of cancer. We are huge perpetrators of climate change.

And our model of success or culture of exploitation permeates our homes. 1/3 of American women report being physically or sexually abused by their husband or boyfriend. In Canada, 1-2 women are murdered every week by a current or former partner. Every moment of every day a women or child in Canada is being sexually assaulted. Every 12 seconds a woman is being abused in the United States. In Mexico, the violence is even more culturally engrained and public. Addiction to drugs and alcohol are rising. The violence is increasing as the economic situation worsens and more and more lose their jobs. Where there are laws against domestic violence, they are often not used. To press charges is to go public. We think it will make things worse and we don’t want to admit to our failure to our community. We show our children that success is achieved through exploiting and violating those more weak than us and that we should not stand up and say no.

We must stand up and say no. We must say no to the violence in our economy, in our consumption and in our homes. We must realize that it is not poverty that we need to eradicate, but rather it is power and wealth and the insatiable need for more of it that causes the problems and must be eliminated.

We must teach our children that they are beautiful, valued and loved and that they too must say no. We must break the culture of exploitation and the culture of violence and silence that supports it.

Every adult must take responsibility to protect every woman and every child. As a society we must support parents so that they do not have to work so many hours away from their children letting either TV’s or other children socialize them.

Finally, we must make alliances to help us achieve our goals. In Canada there is the White Ribbon Campaign. It is a group of high profile men that are speaking out against violence against women. We want to find out how it started and how to replicate it in all of our communities.

So let me end by saying that we must end this culture of exploitation. Do not believe it when they tell you that everything is fine in North America and that if you just did what we do, that everything will be great. Don’t believe that it is your fault when it doesn’t work. Together we will stand up in solidarity and say no to those who would exploit and abuse us.