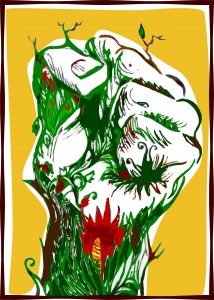 On this day twenty two year ago 19 landless peasants were murdered by agribusiness (#AgroMata) in Brazil. We denounce Free Trade Agreements (FTA), linked with the land struggle (to commercialize our common wealth/ naturals goods) and the criminalisation of our social and land struggles. We call on our member organisations, allies, friends and organised peoples to coordinate actions of resistance in all forms for land and sea in South Africa, against Free Trade Agreements (FTA) and the criminalisation of social struggles.

We celebrate this important day of international mobilisations for the defence of social demands against government forces and large multinational companies. These companies usurp natural resources and smother the defence of millions of peasant and indigenous families in their legitimate fight for land, water and territory.

In this context, Free Trade Agreements (FTAs) serve as instruments propelled by corporations and States to establish the rules by which our natural resources are sold; they commercialise humanity’s shared resources, such as land and water, and use them to generate profit. Today, FTAs represent the expression of an anti-democratic wave on a global level, which attempts to impose the economic interests of the few over the well-being and quality of life of the many.

Multinational corporations and antidemocratic states promote unfair practices to boost extractivism, the looting of the land, large-scale monocultures for export, and the use of lands primarily for large-scale monocultures for agribusiness. Land and water are becoming increasingly important, and are the focus of strong economic interest, as much for national elites as for foreign ones. For this reason, there exist today alarming persecutions, criminalisation, evictions and even deaths amongst small scale farmers, farm workers/dwellers, as well as local rural people in the defence of their lands and against the exploitation of common resources. In South Africa we are reminded of the Marikana Massacre of 2012 and the farmworker killings during 2012/13, as well as the assassination of community leaders who defied extractivism in Xolobeni in the Eastern Cape.

We condemn the advance of capital over peoples and territories. Capitalism, racism and patriarchy form an intertwined model of multiple domination with the monopolisation of land, the looting of common property, labour exploitation and the control of bodies and misogyny. We live faced with the massive violation of human rights, where crimes past and present go unpunished, popular movements are criminalised, and where leaders disappear or are murdered.

Faced with international capital and Free Trade Agreements, we unite to defend and achieve agrarian reform in the sense of the people’s right to land, territory, water and indigenous seeds: the fundamental basis of Food Sovereignty.

This 17th April the FSC will have placard demonstrations at the Department of Rural Development and Land Reform, the Department of Human Settlements and the South African Heritage Resources Agency in Cape Town where we will highlight the importance of our rights to food sovereignty and agrarian transformation. Our small scale farmers, farm workers, landless people, rural women and youth will demonstrate how their land rights have been violated by free trade agreements and the complicity of the state to enforce the nations commitment to land reform, and reforms to bring about EQUITABLE ACCESS TO ALL SOUTH AFRICA’S natural resources and to create conditions for South African to gain access to land on an equitable basis. On 18 April the FSC will have a public forum in Khayalitsha on the land question in South Africa. Despite having a program of land reform since the inception of the democratic government, less than 9 percent of white agricultural land has been redistributed to black people in the country. In addition, the ANC-led government has done nothing to address agrarian transformation and land reform in urban areas. We ask you to join us.

We feed our people and build a movement to change the world!
Against the looting of resources and imperialism; supporting the land and sovereignty of our people!
Join local struggles
Join the FSC