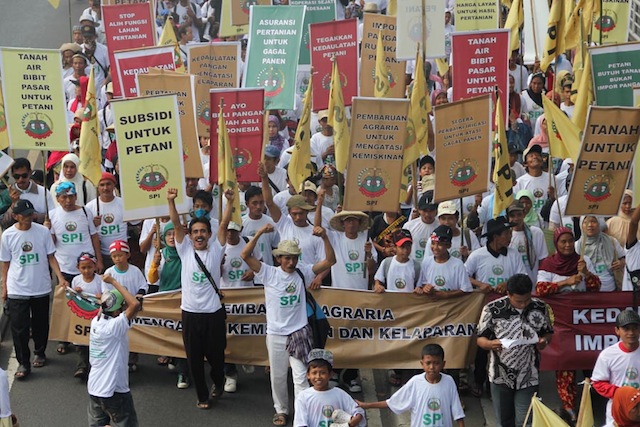 Seven thousand members of Indonesian Peasant Union (SPI) organize action to commemorate the National Farmers’ Day in Jakarta on Saturday (24/9). Among the participants are peasants coming from West Java and Banten province. People have to travel around 4 to 6 hours from their village to Jakarta.

“We are in a good spirit to come to the capital to celebrate this big day for peasants, and we need to voice our concerns to the government,” Abay Haetami from Banten says.

Meanwhile Fauzan Kreyo from Cirebon, West Java reiterates the need for agrarian reform. “Agrarian reform was mandated 51 years ago today by the enactment of Basic Agrarian Law, the government need to really implement that now,” he exclaims to the mass.

The action started at 8 in the morning, completed with singing the national anthem and other movement-related chants.

Marwiyah, peasant women from Sukabumi, West Java, expresses that she and her family are prepared for the action.

“We truly aware that the peasants all across Indonesia need to be united. We prepare food and transportation to come to Jakarta by ourselves, we need that in order to make the action smoothly,” mother of two says.

Henry Saragih, chairperson of SPI, in his oration says that the national peasants movement will continue to celebrate the National Farmers’ Day annually because it is a great moment to strengthen solidarity among peasants in the country.

“We come together around seven thousand this year, and we will gradually increase years after,” Henry says to respond the cheer of the mass.

Some of the SPI representatives are scheduled to meet Presidential staffs at the Merdeka Palace. Some of the issues to be discussed are agrarian reform and its urgent implementation to redistribute 9.6 million hectares of land and to stop food estate project. In order to stop criminalization of peasants’ struggle, SPI propose a national law to protect the rights of peasants.

Eleven other province chapters of SPI also organize activities in the same day. *****