Dear Sir,
On 15th August 2006, from the ramparts of the Red Fort you had timely acknowledged the deepening agrarian crisis and increasing farmers’ suicide in India. You had said, “I see that our farmers in many parts are in a crisis, not managing to eke out a decent living from their land… The agricultural crisis that is forcing them to take the desperate step of committing suicide needs to be resolved”. Even though our economy is booming and our stock exchange sensex is skyrocketing yet more than 65% of our population who eke out their livelihood from farms and farm related activities are in deep distress. Several of the government reports speak loudly about the pathetic condition of rural community, e.g. National Commission for Enterprises in the Unorganised Sector (NCEUS) said about 836 million people (77%) live on below Rs 20 per day. 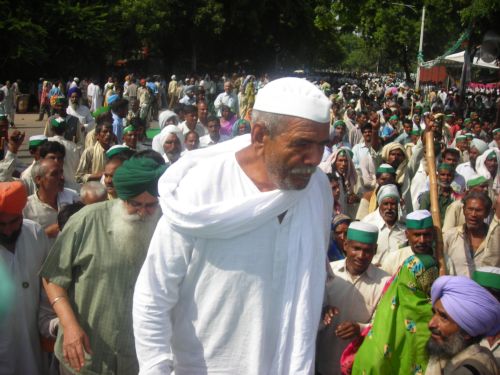 The epidemic of farmers’ suicide is the real barometer of the stress under which Indian agriculture and Indian farmers have been put by globalization and liberalization of agriculture. Across the country farmers are taking the desperate step of ending their life because of the new pressures building upon them as a result of globalization and corporate takeover leading to spread of capital-intensive agriculture. Heavy indebtedness due to unfriendly and anti farmers lending policies of our financial system has remained one of the main reasons behind farmers’ committing suicide.

But surprisingly, the government policy level response and actions continue to be insensitive to this reality and all efforts are being made to hide the real reasons for agrarian crisis and offer corporatization of agriculture as the solution for the agrarian distress. The UPA government under your leadership is intensely pushing for the corporate agenda for agricultural development and opening up of the agriculture sector to the corporate capital. It is being done through facilitating the corporate ownership of land by abolishing the ceiling laws and promoting special economic zones (SEZ), contract farming, private markets (APMC), retail chains, seed monopolization, monopolization of our agriculture research (through Indo-US Knowledge Deal), promotion of GMOs, excessive import of food grains (esp. wheat) to depress domestic price for facilitating corporate procurement thus furthering the dependence of farmers on the corporate sector for both procurement of inputs and marketing of output. This corporate agriculture syndrome continues to govern the policy making of your government.

In view of the above, we urge you to take the following steps:
1.         Pro-Farmer Policy: So far the UPA government tried to deal with the agrarian crisis and farmers suicide in installments and through package deals, e.g. the Vidarbha Relief Package, which brings temporary relief to limited number of farmers and is not long-term solutions. We demand that the Central and state governments need to strengthen all the necessary conditions for subsistence farming. Keeping this in view we demand from you that your Govt. must introduce comprehensive policy measures to protect land and its produce for farmers and for that purpose withdraw operations of free market access to all lands and agriculture as well as ban contract farming and other practice that affect the farmers’ exclusive ownership over their land.

2.         Waiver of Loans: It is unfortunate that in the last 15 years about 15000 farmers have committed suicide owing to reasons inter-alia including their heavy indebtedness due to our financial systems. Surprisingly our banking system has provided no reprieve to poor farmers to save them from the clutches of money lenders. Rather banks have been found following path of money lenders while recovering their money from penny less farmers. It is surprising that none of the Governments have been able to provide a better and effective financial system to ensure welfare of farmers even after 60 years of our independence. In view of this it is our demand that the outstanding loans in the books of Co-operative banks, Rural Banks and other Scheduled Banks should be waived by providing budgetary support to banks.

3.         Better Procurement Prices: In the fixation of MSP, in respect of farm produce, we demand that the process followed for deciding MSP should be more logical and transparent. Unfortunately the existing process followed, does not take practical aspects as actual market prices of farm inputs at the current index and their availability and cost of finance in to account while deciding MSP of crops. On the contrary the UPA government is also thinking on the lines of stopping the minimum support price mechanisms, which, we believe, is an imperative for farmers’ income security. This would be a great injustice to Indian farmers if MSP is done away with. We therefore demand that the government must strengthen MSP mechanisms, fix the procurement price of all agricultural produce before the sowing season, increase the procurement price of all crops which should cover their cost of production and ensure procurement of all agricultural produce for which Minimum Support Price (MSP) has been announced.

4.         Stop wheat Import: The recent procurement of wheat at Rs. 750 per quintal is live example of defective MSP fixation mechanism. The farmers shied away   from selling their produce at the abnormally low MSP vis-à-vis price offered by corporates under full knowledge of your government. You are kindly aware that your Govt. had to intervene (unsuccessfully) by inviting corporates for considering your request for not going to farmers before the Govt. procurement targets are achieved. It is beyond every bodies understanding as to why your Govt. did not offer competitive prices to the poor farmers of our own country and now you have decided to import the substandard wheat at Rs. 1600 per quintal clearly at the cost of lives of poor farmers. In view of this we demand from you to immediately issue directions to stop import of wheat and announce a more logical procurement price for wheat and other crops. A beginning should be made with an immediate announcement of an MSP of at least Rs. 1200 per quintal for wheat before the sowing begins.

Farmers engaged in the cultivation of sugarcane and rice are in no better situation. Outstanding dues of sugar cane farmers against their crops are well known. To ensure release of their outstanding dues we demand that Your Govt. should provide budgetary support.

5.         Include Farmers in the Sixth Pay Commission: Mr. Prime Minister we wish to draw your attention to the 6 th Pay Commission. You may be aware that through the implementation of 6th pay commission about 2.50 crore Govt. employees shall be benefited by drawing extra salaries to the tune of about Rs. 1,00,000.00 crore per annum. Contrary to this the basic food provider of the land, the poor farmer is still starving with a continuous fall in his income. In this context we demand from you to include farmers in the 6th pay commission and evolve a system where in a minimum income should be ensured to our poor peasantry and land less labours.

6.         Stop Autonomous Liberalization and Keep Agriculture out of WTO: Sir, the ongoing agenda of negotiations in WTO is a serious cause of concern of our farmers. Issues relating to the autonomous trade liberalization in agriculture, e.g. lowering of tariff on edible oil, cotton, wheat and other commodities must be dealt with effectively keeping in view the various factors peculiar to our farming communities. Any generalization would be very harmful not only for our farmers but the country also. In view of this we demand that the approach being adopted by our Govt. in dealing with WTO should be transparent and a more effective farmers participation be ensured in preparations for WTO. We also demand that India should insist on keeping agriculture out of the WTO.

7.         Ban Commercial release of Genetically Modified Organisms (GMOs): The plight of Indian farmers who opted for genetically modified seeds as transgenic cotton (Bt. cotton) in the country and its failure, is not hidden from any one. The approach of UPA government towards the GMOs is a cause of concern of our farmers. On one hand the use of such technologies has proven in failure and on the other hand it has lead to a monopoly of providers of GMOs.  This goes against the recommendations of the National Commission on Farmers. The bias of the Genetic Engineering Approval Committee (GEAC) in favour of biotech industries is evident from the manner in which serious environmental, human and animal health issues are being ignored. Working in tandem with the companies, the GEAC is turning India into a dumping ground for untested and risky GM crops and food. We also demand a complete ban on commercial release of all GM crops and foods in the country.

We are therefore hoping that you will immediately take notice of our demands and take necessary actions.