Jakarta: In Central Java, the Batang-Semarang highway construction has led to blatant and unjust grabbing of lands and houses onwed by 140 peasant families from the nine villages of Ngawensari, Galih, Sumbersari, Rejosar, Tunggulsari, Kertomulyo, Penjalin, Magelung and Nolokerto. The highway construction project, which is part of the ambitious infrastructure targets of Joko Widodo-Jusuf Kalla government in the region has brought misery to hundreds of peasant families who are also members of Serikat Petani Indonesia (SPI), the Indonesian Pesants’ Union. SPI is a member of La Via Campesina.

On April 13th, 2018, SPI Kendal members received a intimation from the Kendal Court asking residents to clear the land and make way for the construction of Batang-Semarang Highway in Kendal District. The letter ordered the community to vacate the land and buildings voluntarily before the officers do it by force on April 23-26th, 2018. This is despite that fact that the process of measuring and valuing the plot of land and buildings, which is going to be built has not been completed and is still not in accordance with the will of the people.

Regardless of the objections of peasants and people, the Kendal Court insisted on the implementation of the order. On Monday, 23 April, peasants’ houses and lands in Sumbersari Village, Ngampel District, owned by Kasipan, Alfiah’s house in Kertomulyo Village, Brangsong Sub-district, Paidi’s house in Kertomulyo Village, Brangsong Sub-district and Suriati’s house in Tunggulsari Village, Brangsong sub-district – were grabbed by force. It repeated on Tuesday, 24 April, in Nolokerto Village, Kaliwungu Sub-district, Simun, Hasan and Surmi houses. Then in the village of Magelung, South Kaliwungu Sub-District, Maspiah, Supardi and Satrio houses.
Until the morning of 25 April, at least ten houses have been razed down. Currently residents who are victims of eviction have been sheltered by neighbors and relatives.

While responding to the matter, Chairperson of SPI Henry Saragih asserted, “Land grabbing for the highway construction is one of the consequences of the implementation of Law No. 2 of 2012 on Land Procurement for Development for Public Interest (Land procurement Law). The Land Procurement Law legalises land grabbing, although it was mentioned for development and public interest.” 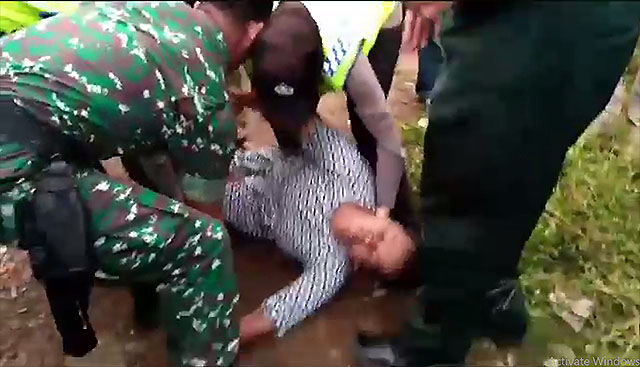 “This law forces people to agree on the price offered by the capitalist. The position of the people of the landowners was weakened in the matter of compensation. There is no rule in the law that regulates the issue of price compensation through deliberation and consensus . The compensation is based on government interpretation and price benchmarks that are rigid and non-negotiable. If there is a dispute, it will be immediately taken to court, ” Henry said in Jakarta this morning.

SPI strongly condemned the land and house grabbing which is being carried out without any regard to the recommendations from KOMNASHAM (National Commission of Human Rights), ORI (ombudsman or even from KSP (the Office of President Staff).

The outrage and sentiment was echoed by the Chairpeson of SPI in Kendal, Nurochim. He explained that the conflict arose when the task force met the communities to discuss land procurement one day and then soon after followed it up with an exercise to measure the land and buildings in the area. After the measurement, the task force issued the nominative data on houses and lands that will be affected by the construction of highway in the village. However, the size of the area they reported did not match the realities on the ground.

“The area of land that must be replaced according to us is 73,586,79 m2 but task force of BPN (National Land Agency) Kendal claimed only 69,201 m2 area. As a result, residents and peasants filed protests and objections. The village head took the complaints of the residents to the task force led by the National Land Agency (BPN) Kendal, but it was never addressed, “said Nurochim

When their protest letters were ignored, the peasant communities with help from SPI took the complaint to several related agencies in Jakarta and held hearings. A total of 20 people affected by Kendal highway also attended the hearings with the Ombudsman, Directorate General of Land Procurement Ministry of Agrarian and Spatial / National Land Agency (ATR / BPN), Executive Board of Nahdlatul Ulama (PBNU), Commission V of Parliament, National Commission of Human Rights (KOMNASHAM) of the Republic of Indonesia to the Office of the Presidential Staff (KSP) listening to them.

Nurochim added, “The Director General of Land Procurement of the Ministry of ATR / BPN said that the data used by task force is the data from the government in 2008-2012, thereby suppressing the actual and current price of the land. Appraisal should use the data of the current year.”

“The Office of the Presidential Staff (KSP) promised to visit the area to bring together the parties. We will resist this blatant violations of our rights as peasants and as the citizens of Indonesia,” he said.
Nurochim also added that the residents and peasants do not reject the construction of highway.

“We SPI Kendal peasants are not against the construction of the highway. But we demand that the assessment of our losses – in terms of the size of land, the plants, the business, the buildings – all of which we are giving up for the highway must be carried out fairly and compensated adequately. How shall we uphold food sovereignty, if the government does not relocate our farms, our homes, “he asked.

Henry Saragih asserted, “The problem of land procurement that is happening today is because Jokowi’s government, which is known to care about people and promises Agrarian Reform, using the Law on Land Procurement, which was originally formed by the previous government as a tool to evict the peasants’ houses and lands. President Jokowi should have issued a Substitute Regulation that prioritizes deliberation and implementation of the principles of food sovereignty ”

Henry Saragih also announced that SPI will conduct mass action nationally at the State Palace on Thursday. “Protest action will also be run simultaneously in all SPI Regions in Indonesia,” he warned.

Cover Image: From the protest that took place outside the President’s Palace earlier today (26 April).