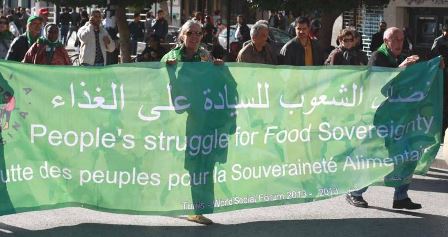 Harare, 15 March, 2015 – La Via Campesina, an International Peasant Movement, will be represented at the World Social Forum in Tunis as from March 24th up to 28th by a bunch of fifty delegates, made up of peasant (men and women), farming labors, from more than 20 countries of the global regions, with a particular focus of the Arabic world delegates.

La Via Campesina considers this as an important space for mobilization opportunity around alternatives and proposals in favor of Food sovereignty as well as strengthening the solidarity with the allies and other social movements, mainly the Maghreb and Mashreq ones.

In fact, the 2015 WSF will be held at a crucial moment at which the social movement are seeking for justice, freedom and solidarity.  The set goals and orientations do take into consideration the political, social and economic changes in Maghreb-Mashreq, and as well in the African continent, with regard to the ecological and economical crisis around the entire globe.  The identified objectives are indications of a better solution to all these crucial issues, and promote the convergences and alternative construction.

According to N’Diakhate Fall, a CNCR Peasant leader in Senegal, and a member of the International Coordination Committee of la Via Campesina, « Food sovereignty is an alternative, if well implemented, can solve in major part the crisis being lived by humanity, mainly the food and climate crisis».

In Tunis, La Via Campesina will take part in many self-directed activities, and will be part of the Land and Water Global Convergence, the Resistance Global Convergence to the rhythm of the Transnational cooperation and a workshop to restore the local food systems with URGENCI, HIC and RIPESS.

The complete agenda of la Via Campesina in Tunis is available here.

A press conference is scheduled on March 26th at 11h30 in a venue to be confirmed.