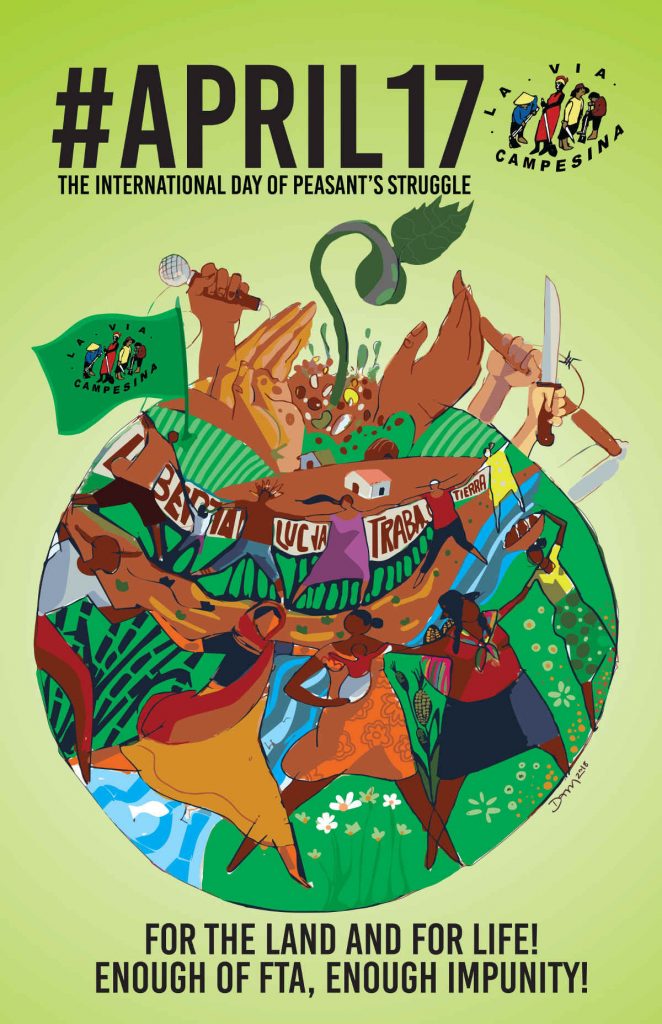 (Harare, 10th April 2018) : This 17th April, on the International Day of Peasants’ Struggles, La Via Campesina recalls the massacre of the 19 landless peasants, murdered by agribusiness (#AgroMata).

United in courage and rebellion, we call on our member organisations, allies, friends and organised peoples to coordinate actions of resistance in all forms for Land and sea, on a worldwide scale, against Free Trade Agreements (FTA) and the criminalisation of social struggles.

We celebrate this important day of international mobilisations for the defence of social demands against government forces and large multinational companies. These companies usurp natural resources and smother the defence of millions of peasant and indigenous families in their legitimate fight for land, water and territory.

We condemn the advance of capital over peoples and territories. Capitalism, racism and patriarchy form an intertwined model of multiple domination with the monopolisation of land, the looting of common property, labour exploitation and the control of bodies and misogyny.

We live faced with the massive violation of human rights, where crimes past and present go unpunished, popular movements are criminalised, and where social leaders disappear or are murdered. The impunity of the state terrorism of the past has become the basis of impunity for big businesses today.

In this context, Free Trade Agreements (FTAs) serve as instruments propelled by corporations and States to establish the rules by which our natural resources are sold; they commercialise humanity’s shared resources, such as land and water, and use them to generate profit.

Today, FTAs represent the expression of an anti-democratic wave on a global level, which attempts to impose the economic interests of the few over the well-being and quality of life of the many.

Faced with international capital and Free Trade Agreements, at La Via Campesina, we unite to defend and achieve agrarian reform in the sense of the people’s right to land, territory, water and indigenous seeds: the fundamental basis of Food Sovereignty.

Multinational corporations and antidemocratic states promote unfair practices to boost extractivism, the looting of the land, large-scale monocultures for exportation, and the use of lands primarily for large-scale monocultures for agribusiness. Land and water are becoming increasingly important, and are the focus of strong economic interest, as much for national elites as for foreign ones. For this reason, there exist today alarming persecutions, criminalisation, evictions and deaths amongst peasants as well as indigenous and coloured peoples in the defence of their lands and against the exploitation of common resources.

This 17th April (#17April) we ask you to participate in the numerous actions planned on a global level: organise marches, forums, seminars, rural fairs or film screenings. Every form of expression is important in denouncing the terrible effects of FTAs on the peasantry and on Food Sovereignty.

Please share all actions planned for this day by emailing us at: lvcweb@viacampesina.org. We want to create a visual representation of them on our map of global action. Send us your articles, sound recordings, photographs and videos, as well, so that we can broadcast them online and on VíaCampesinaTV.

Together, we can feed our people and create a movement to change the world!
Against the looting of resources and imperialism; supporting the land and sovereignty of our people!