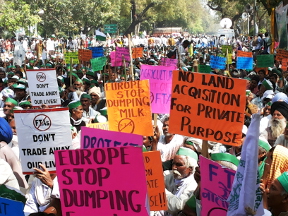 A historic mobilization of more than 1 lakh farmers, farm workers and agrarian masses belonging to a wide variety of social movements from across India descended upon New Delhi today. Protestors at the “Kisan Khet Mazdoor Mahapanchayat” in Jantar Mantar came all the way to the Indian capital to show their collective commitment to reversing the ongoing agrarian crisis. The government’s responsibility for this crisis lies in its overenthusiasm for liberalization reforms, which ultimately support foreign investors, corporations and elite consumers instead of the agrarian masses and common people of India. Farmers from the Indian Coordination Committee of Farmers’ Movements (ICCFM), which comprises of independent mass farmers groups such as the Bhartiya Kisan Union and the Karnataka Farmers Movement (KRRS), have joined hands with the largest alliance of peoples’ movements in India called the National Alliance of People’s Movements (NAPM) in order to defend Indian people’s access to land, water, forest and seeds – the most important resources of agrarian people, and the source of food and livelihood for the Indian masses.

Addressing the masses at Jantar Mantar, Naresh Tikait, National Chairperson of BKU said, “Millions of food producers are being forced to abandon agriculture and leave the villages in search of insecure, unavailable jobs. Or they are pushed to even commit suicide in lakhs. At this rate, there will be only a small number of farmers left in the country very soon. If the Indian government continues to promote unharnessed industrialization and elite consumerism then where will the water and electricity come from for such large industrial projects and what will be the impact on nature and the poor?”.

Speaking on the land acquisition act, Rakesh Tikait of BKU said, “Agriculture has been turned into a losing way of life: our lands, the main resource for our livelihoods, are being grabbed for private corporations. We have been trying to get the attention of the government but they have no time for the farmers, they make false verbal commitment. But this time our coordination committee of farmers have made a resolution that we will not move from Delhi until we get a serious commitment from the UPA government. In fact we have made a call to farmers from across the country to come to Delhi to join our struggle.”

All the farmers leaders collectively burned the Land Acquisition & Resettlement and Rehabilition Act 2011, which is currently high on the national political agenda. Although farmers support a new land bill, they absolutely do not support the current form of the bill which has ignored the recommendations of the Parliamentary Standing Committee and converted the bill into an instrument for taking away farm land for private corporations. Medha Patkar of the NAPM said, “The first right over land is of farmers, so that they can produce food for the Indian masses, and have a livelihood. The bill should be returned to the parliamentary standing committee. Instead of grabbing more land the government should tell us first what it is doing with all the land that it has already taken from people over the last so many years, not even providing compensation or rehabilitation to the poor who have given up their land. The Indian government cannot grab our land for private corporations at any cost.”.

In the five-point list of demands created by the mahapanchayat, farmers’ income was pointed out as a major issue for farmers. “The average income of a farming household is a mere 1800 Rs, not even enough to cover basic needs. Even the lowest government employee, a peon will get about 20,000 Rs. How are we expected to survive at this rate. Farmers should get a guaranteed income like all other government officials.” said Rajpal Sharma of BKU. Calling the MSP as an unjust and unscientific category which does not even cover the cost of production, they have instead asked for a profitable and remunerative price of all crops, which they call the Farmers and Remunerative Prices (FRP). Nandini Jairam of KRRS said , “The government is always proudly announcing more and more loans for the farmers. This is not going to help the farmers but to further get into debt, the main cause of farmers suicides. The government should be directly accountable for improving the net incomes of farming households and this is how we will measure the performance of the government. A National Farmers’ Income Guarantee Act should be created which will assure a guaranteed income to farmers, tenants and sharecroppers by making farming remunerative.”

When asked about the performance of the agriculture minister Sharad Pawar, Pankaj Bhushan of the Alliance of Sustainable and Holistic Agriculture said, “Sharad Pawar is under the influence of Monsanto. Instead of supporting the majority of the small farmers of our country, so many of whom have taken the step of committing suicide because of debt, Pawar is openly promoting controversial GMOs. Even the government’s own CICR has admitted that Bt cotton has failed but Pawar continues to push for this instead of supporting successful ecological farming models that are all over the country. He is anti-farmer and anti -national.”

“What we need is a secure market for our produce. even if we increase productivity through various available technologies, where will we sell our crops? If we are given a market we can produce more than any GM in the world. Instead UPA is promoting free trade agreements, such as the EU India FTA so that they can dump their produce in our country, pushing our local farmers out of business” said Yudhvir Singh of BKU.

Swami Agnivesh expressed his great contentment that at a time when a very corrupt and anti people government continues to carry out its anti people agenda, it is a great sign that peoples movements are coming together to defend the rights of the common man and especially the Anna Datas. “It is a great shame for our country that we allow the suicides of our farmers and in fact deny that farmers suicides are going on. The parliament should have an emergency special session on the agrarian crisis,” he said.

Chukki Nanjundaswamy of KRRS said, “The government has been sleeping, but this time we have come here from across the country and we will not leave Jantar Mantar unless they respond to our demands.”