(Rome, 18 November 2009) The blatant absence of the heads of states of the G8 countries in the World Food Summit, held in Rome from 16 to 18th of November was one of the key causes of the total failure of this summit. There were no concrete measures taken to eradicate hunger, to stop food speculation or to stop the expansion of agrofuels. There were no measures to stop the devastating effects of corporate agriculture or to support domestic peasant based food production. 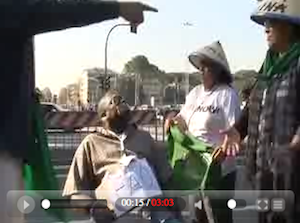 The summit did not take up the challenge of a radical, desperately needed change in food and agricultural policies, guaranteeing the access and control of the peasants and small scale farmers over production resources through agrarian reform. The absence of the G8 heads of state shows an enormous lack of responsibility to resolve this deepening hunger crisis.

La Via Campesina demands increasing investment in public policies based on food sovereignty that promotes small scale sustainable farming and food production. Priority should be given to support those who produce food in a sustainable way for the local communities instead of favoring export crops,
agrofuels or technologies such as GMOs pushed by transnational corporations. Agriculture should be taken out of any free trade agreement in order to
enable countries to effectively protect their free domestic food production.

La Via Campesina strongly supports the reformed FAO Committee on World Food Security (CFS). Contrary to the mechanisms set up outside the UN system, it at least respects the basic rule of democracy, the principle of “one country one vote” and gives a new space to Civil Society. All funds made available to support solutions for the food crisis should be allocated under the responsibility of the renewed CFS. But instead giving their full support to
the reformed CFS, the G8 countries are opting to set up a trust fund under the World Bank. A proposal from the World Bank suggests that the use of
these funds be decided by a donor committee composed of the donor countries, the coordinator of the High Level Task Force and the managing director of
the World Bank. In practice this means that two bureaucrats along the donor countries will decide where the money goes. This is a scandalous lack of
transparency and democracy and totally opposite to the rethoric of the High Level Task Force and the World Bank on these issues.

In general the policies of the World Bank, together with the WTO and the IMF, have contributed in a major way to the destruction of food security at a global level. We cannot expect these institutions to be the ones that will put forward the solutions.

La Via Campesina holds that it is time that these institutions recognize their enormous failures and leave the task to others. La Via Campesina and many other social movements and NGOs have are proposing solutions and will be actors in this crucial process of change. We demand that our governments
allow our full participation in the definition of policies and we expect their full support for this process. They must commit themselves to implement effective policies to eradicate hunger in our societies as quickly as possible.