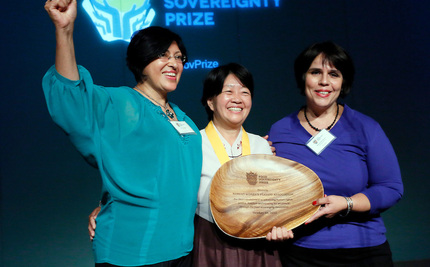 by George Naylor, Iowa farmer and former board president of the National Family Farm Coalition, guest blogs about the upcoming 2012‚ Food Sovereignty Prize.

The World Food Prize was established by Dr. Norman Borlaug, an Iowa native considered to be the father of the Green Revolution, which centered on the laboratory breeding of cereal crops that could increase yields through the application of artificial nitrogen fertilizer without lodging (falling down).

According to the World Food Prize Foundation:

The World Food Prize is the foremost international award recognizing — without regard to race, religion, nationality, or political beliefs — the achievements of individuals who have advanced human development by improving the quality, quantity or availability of food in the world. By honoring those who have worked successfully toward this goal, The Prize calls attention to what has been done to improve global food security and to what can be accomplished in the future.

Through the years, this has been generalized to glorify all technologies that increase yields without regard for issues of ecology, culture or the concentration of political and economic power through these technologies. The Green Revolution fully ignored the role of democratic policy, which avoids ecological and social costs while ensuring that food production and food producers remain vital to their society and culture. From the perspective of family farmers and peasants who revere Food Sovereignty, sustainable, democratic foods that respect ecology, culture and diversity of economic opportunity offer a lot more than just improving the equality, quantity or availability of food for current and future generations.

The mechanization and globalization following World War II has led to urbanization, deteriorated rural communities and industrialized agriculture. As president of the National Family Farm Coalition I couldn’t believe how closely the situation for U.S. farmers resembled that of farmers around the world. What is even more scary is that this process was most advanced in the United States, yet the American public including citizens of agricultural states like Iowa were either unaware of the negative consequences or felt powerless to change them. While family farmers and rural residents in my home state of Iowa battle factory farms that replace diversified family farms and pollute our air and water, the World Food Prize totally dismisses this situation in their own back yard. In fact, the politicians also neglecting these problems and the CEOs of multinational agribusinesses feeding and running those factory farms will be front and center in the World Food Prize pageantry.

The multinational corporations that patent technologies like toxic pesticides and genetically engineered crops also partner with governments at various levels and land grant institutions. Their influence on international entities, such as the UN, World Bank and trade agreements, means that the logic of the free market is being globally institutionalized in the interests of these corporations. The economic lessons of the Great Depression and democratic policies of the New Deal aimed at fair farm prices through supply management and conservation programs have been dismantled. Countries were forced to let cheap imports impoverish their farmers and food security reserves were abandoned just like in the U.S. This neoliberal policy is designed to let “market forces” fashion our societies, pitting farmers and workers in global competition and discounting the worldwide destruction of biodiversity, the rich cultures of diverse societies and local or regional economies. At the same time we are told that government is the enemy, although in a democratic society, WE are the government.

Agribusiness trade groups and their politicians like to spout “Iowa farmers feed the world,” implying that their technologies are necessary to feed hungry people. This is clearly not the case. Iowa is the largest state producer of corn and soybeans, and these are used to feed livestock or biofuel refineries in domestic or export markets. The resulting products of meat, milk and eggs, or gasohol and biodiesel, are not affordable or usable for hungry people. When new technologies make these land- and energy-intensive crops more productive, the natural landscapes, biodiversity, and indigenous communities will be bulldozed. The giant global pile of corn and soybeans will increase, and Iowa farmers (and farmers and peasants around the world) will be burdened under the agony of devastating low prices.

This is why Food Sovereignty is so important. Food Sovereignty means recognizing that WE the people make important decisions through OUR democratic governments. Letting our societies become everyone for him/herself means multinational corporations will rule the world (as in the title of David Korten’s book, When Corporations Rule the World). Food Sovereignty does not subscribe to nationalistic solutions of the past – it strives to empower citizens to make important decisions about how their land is used, and food is produced and processed, while respecting other people, other cultures, and the beautiful, natural world on which we all depend.

I commend the organizers in Des Moines of the Occupy the World Food Prize campaign for drawing attention to the sophistry and pageantry of the World Food Prize meant to mesmerize the public for the benefit of multinational agribusiness corporations. I am so thankful that WhyHunger and the Food Sovereignty Alliance have arranged for the Food Sovereignty Prize winner, the Korean Women Peasants Association, to be recognized in New York. Iowa grassroots groups combating agribusiness policies will welcome KWPA chairwoman, Mrs. Jeomok Bak, to discuss the global struggles of the international coalition of farmers and peasants, La Via Campesina. I believe these connections will lead to even more grassroots action here in Iowa and in every country to demand truly democratic societies for which Food Sovereignty will be the foundation. (See also www.foodsovereigntyprize.org.)

George Naylor raises non-GMO soybeans and corn in Iowa. As a member of Iowa CCI, he served as board president of the National Family Farm Coalition for several years. He has a chapter, “Without Parity, All You Get is Charity” in the new book, Food Movements Unite!, published by Food First.