UAWC participates in the World Social Forum in Tunis 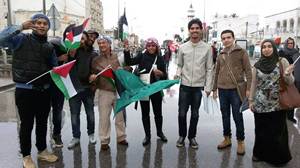 UAWC and LVC organized several activities in the WSF to discuss The fight for Food Sovereignty: The role of La Via Campesina in the defense of peasant’s rights, Defending peasant seeds from commodification and corporate capture, Small Scale farmer’s solutions to Climate Change, The role of the peasant Women in the Arab world, and many other activities that interest farmers and empowers them to defend their rights. The World Social Forum is an annual meeting of civil society organizations, first held in Brazil, which offers a self-conscious effort to develop an alternative future through the championing of counter-hegemonic globalization.

The World Social Forum is “an opened space – plural, diverse, non-governmental and non-partisan – that stimulates the decentralized debate, reflection, proposals building, experiences exchange and alliances among movements and organizations engaged in concrete actions towards a more solidarity, democratic and fair world….a permanent space and process to build alternatives to neoliberalism.” It is held by members of the alter-globalization movement (also referred to as the global justice movement) who come together to coordinate global campaigns, share and refine organizing strategies, and inform each other about movements from around the world and their particular issues.