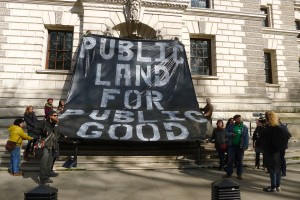 (London, April 2016) The Landworkers’ Alliance (LWA) hung a 7m banner over the entrance to the treasury today to highlight the continued sell off of publicly owned farmland and council housing under the Government’s austerity programme. The action took place as part of La Via Campesina’s ‘International day of Agrarian Struggle’ that will see co-ordinated actions across more than 70 countries highlighting threats to the livelihoods of 200 million ecological and family farmers worldwide.

The LWA’s action focused on the 9,500 acres of publicly owned farmland and 219 working farms that have been sold by local councils since 2010 under pressure from the Government to raise capital and meet fiscal deficits. The sell off of the public farmland estate is part of £37bn of privatization sales made by George Osborne since 2010 under which public food and farming assets have been regarded as any other commodity to be bought and sold.

‘Council owned farms have traditionally played a vital role in providing successive generations with a first step on the farming ladder’ says Humphrey Lloyd of the LWA, ‘the loss of eight percent of the public farm estate over the past five years has had a massive impact on new entrants into farming and has turned public resources for the many into private wealth for the few.

‘We would like to point out that the continued privatisation of this essential public resource is proceeding with no public consultation whatsoever and shockingly little media attention. Food and farming are not like “any other commodity” and should be protected as Public Land for Public Good.’

The action is supported by the Tenant Farmers Association and was addressed by TFA Chief Executive George Dunn. It was attended by LWA members from across the UK and will be accompanied by speeches from LWA members and tenant farmers who have been affected by Country farm sell offs. 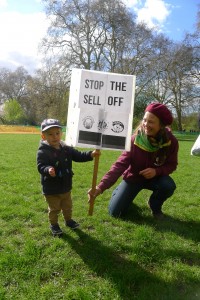 The LWA has called this action to highlight the continued sell off of publicly owned farmland and council housing under the Government’s austerity programme.

The County Farms Estate was established following the Smallholdings & Allotment Act 1908 under which Councils had a statutory duty to meet the demand of applications by young persons to enter into farming. Funding for the purchase of the estate was initially provided by the Ministry of Agriculture.

Following the financial crash in 2008 & subsequent recession the Conservative-led government has prioritised the sale of public assets in order to meet a £69bn/yr fiscal deficit.

The revenue generated from sale of County Farms from 2010-2015 is estimated at £56m nationally. By comparison the Government’s proposed cost of renewal of Trident currently stands at £100 billion.

Over the same period average per hectare rents on remaining Council-owned farms have increased by 30 percent from £212/ha in 2010 to £275/ha today.

Our Position: “Council farms are not simply another asset to be bought and sold – they represents a realistic entry into farming for a generation of first-time farmers and a public resource that should be valued above and beyond balancing the Chancellors books. Council farms represent an opportunity for public engagement with where our food comes from and how it is produced – they should be protected as public land for public good!”

All Figures taken from The Chartered Institute of Public Finance & Accountancy Farm Survey 2015.