Home » Campaign for the Protection of Rice in Sri Lanka 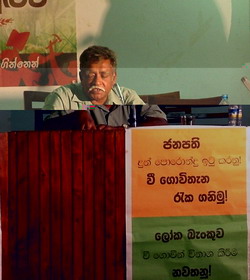 The yala harvest is over. Millions of farmers are waiting to sell their paddy. Government has spent millions of rupees to subsidise fertiliser and has promised to spend millions more to buy paddy at the guaranteed price, but most farmers will still receive less than they spent. They will fall further into debt, some will even commit suicide. It happens every season. This is the paddy crisis.

There are solutions and they are being discovered by farmers. The use of ecological methods and indigenous seeds has been shown to both dramatically cut costs and increase yields. Farmers can earn a decent living and also provide healthy rice at a reasonable price, while contributing to a process of rebuilding our ecology, the fertility of the soil and the quality and quantity of water sources. The conversion of paddy to rice by farmers themselves is also on the increase and releases both producer and consumer from the grip of the traders who control the market.

Government wants to solve the paddy crisis. It is time to solve it. The problems have been there for many years and many governments have claimed to be addressing them. Plasters have been applied to the wound but it continues to fester. Mahinda Rajapaksa must go to the roots. 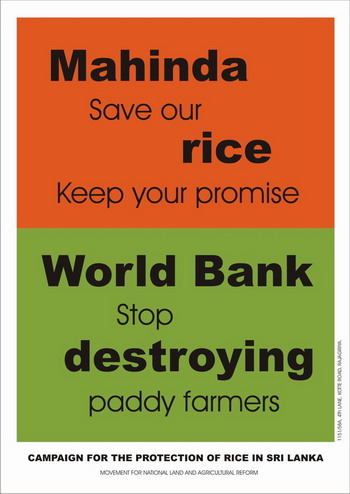 There is also a need for emergency measures. Farmers who have now spent 12 or 13 rupees on each kilo of paddy cannot be left to sell it at 10 or 11 rupees to the traders. This happened after the maha harvest. Mahinda Rajapaksa must make sure it does not happen again.

The paddy crisis did not come from the sky. It was created through the interventions of outside agencies. Destructive and dependent methods were pressed on farmers during the green revolution and then support mechanisms were removed under structural adjustment programmes. The World Bank and Asian Development Bank are responsible. They believe that rice should not be grown in Sri Lanka. Through their interventions, governments have been compelled to cut subsidies on fertilisers and seeds, privatise state fertiliser manufacturing industries and seed farms, sell off stores, mills and retail outlets, close the Paddy Marketing Board and sell off the Cooperative Wholesale Establishment. They have also made tireless attempts to introduce charges for irrigation water and to remove restrictions on the lease and sale of land given to farmers under government grants. These efforts continue to this day. They must be stopped.

It is for these reasons that the National Farmers’ Assembly and the Movement for National Land and Agricultural Reform have decided to initiate a campaign. We intend to work consistently until the paddy crisis is solved, highlighting the solutions and pressing for immediate relief, while fighting against the World Bank and Asian Development Bank. We encourage you to join.